The EU flags Proms team started In 2016, following the European Union referendum. Concerns grew that the Last Night would be hijacked and used as a jingoistic celebration of Brexit. So a group of music lovers crowdfunded a large quantity of EU flags to be waved alongside the Union Jack. We were keen to demonstrate that it is possible to be patriotic at the same time as maintaining a European and internationalist identity. The Proms itself represents musicians and music from all corners of Europe. The group adopted the slogan #ThankEUForTheMusic which can be seen on all the volunteers t-shirts.

Music is a universal language which unites people, breaks down barriers and promotes communication, understanding and peace..

This year we have teamed up with ‘Let The Music Move’, ‘Carry on touring’ and Bectu who are supporting the joint initiative to save our touring arts industries post Brexit.

Musicians and artists will be gathering to show solidarity and raise awareness to the lack of movement from the Government in delivering in their promise to secure an agreement to protect our touring arts during Brexit negotiations.

There will be musicians performing that represent a range of genres including folk, pop, Brazilian, soul, jazz and dance music where there will be a series of mini performances at 2 of the entrances.

We are there to peacefully protest through entertaining the crowds as they enter the hall.

Please come join us! Either to give out flags, perform or just support us, we expect lots of press and will have some surprises in store! 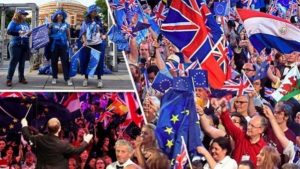